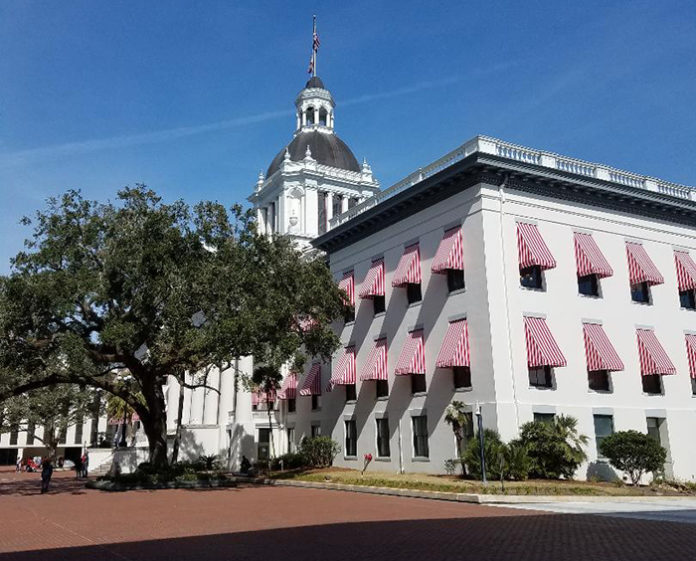 The month of March brings many things to Floridians. Spring breakers fill the beaches of coastal communities, residents spring forward to Daylight Savings Time, and state legislators convene in Tallahassee for a legislative session. While spring break and springing forward are familiar events to Floridians, the governmental process may be a bit of a mystery to them. Now is the time to shed some light on how the state’s legislative process works.

The traditional start to the legislative session is the governor’s State of the State address. On March 5th Florida legislators will assemble in the House chambers to hear newly-elected Republican Governor Ron DeSantis give his first such address. The Florida Legislature is composed of two houses containing a total of 160 legislators. The upper chamber, the Senate, has 40 members who are elected to serve four-year terms. The lower chamber, the House, has 120 members who are elected for two-year terms. Legislators must be at least twenty-one years old to be elected to a seat in either chamber.

This year 66 new legislators were sworn in, so there will be many new faces present at the governor’s State of the State address. Unlike the U.S. Congress, the Republicans currently hold a majority in both the House and the Senate of the Florida Legislature. In the House, the GOP holds a 73-17 majority; in the Senate, the majority is a narrower one—23-17.

Although the regular session begins on March 5, legislators have been busy preparing for the session for some time. Since the week of December 11, they have been participating in committee weeks where proposed bills have been studied and discussed. During a committee week, various committees hold meetings on bills referred to them by the house leadership for review. Senate committees are rather small, perhaps five to eight committee members, while House committees are larger.

The bills which the legislators are going to vote on during the regular session cover an array of topics. Of big concern for the operation of state government is the need to pass a budget for the state’s fiscal year which begins on July 1. Governor DeSantis has proposed a $91.3 billion budget which includes increased funding for education and water-quality projects. Receiving a great deal of attention in the press are legislative efforts to end a ban on the smoking of medical marijuana, a ban at odds with a constitutional amendment passed by voters in 2016. On a less weighty topic, bills have been introduced to approve a number of new specialty license plates to raise money for various causes.

For a bill to become law, a specific process must be followed. First, a legislator must agree to sponsor the bill. This process can begin in either the House or the Senate. Once sponsored, the bill is referred to one or more committees which deal with the subject area. The committee members study the bill and determine the appropriate action to take. The bill may be amended (revised), passed, or failed. Not all bills pass out of committee. If it does, the bill moves on to for additional review by another committee if the bill has been assigned to more than one committee or to the full house if no other committees have been assigned to review it. If the bill passes the House, then it moves to the Senate for review by same procedure; if it passes the Senate, then it moves to the House for review by the same procedure.

The Florida Legislature considers a large volume of bills each session. During the 2018 session over 3,000 bills were filed. Of those filed bills, only about 200 of them were passed, roughly 7% of the legislation proposed.

The legislative process is not one that is conducted behind closed doors. Citizens may attend committee meetings or house meetings. A schedule of legislative events can be found online at https://www.leg.state.fl.us. If one is not able to attend in person, he may view a meeting on the Internet where meetings are streamed.

Legislators welcome input from their constituents as to proposed bills. The legislators cannot be experts on all subjects, so citizens with more familiarity on topics being considered can provide them with valuable insight. Input can take the form of phone calls, e-mails, letters, or even in-person appointments. Legislators have offices in their districts where they can meet with constituents back home as well as in the state capital of Tallahassee.

May 3rd is the last scheduled day of the regular session; however, it is possible for the regular session to be extended by a three-fifths vote of both the House and the Senate. Special sessions can be called by the Governor or set by a joint proclamation of the President of the Senate, currently Bill Galvano, and the Speaker of the House, currently Jose R. Oliva. Such sessions may not exceed twenty days without an extension approved by a three-fifths vote of each house.

Catholic Charismatics – Do they really exist?

Lots of “Luck” and Many Blessings

Relief efforts for the Bahamas in Miami Dade

February 20, 2020
You are going to send email to
Move Comment