Starting in Jacksonville, FL, the Decision America tour, sponsored by the Billy Graham Evangelistic Association, is crossing through Florida with the Gospel message, spending one night in each location, including Panama City, Plant City, Key West, and heading to Ft. Meyers tomorrow. Steve Nickel, Vice President of Donor Ministries, Samaritan’s Purse, told Palm Beach Christian Voice of the mission of the tour.

Our goal is to introduce as many people as possible to Jesus, so that they know the love of God through Christ and have the opportunity to receive Him as their Savior. That’s why this tour happens. Franklin’s heart is for America and for the world to know the Savior because apart from Him, there is no true life.

Jeremy Camp opened the night with songs from his new release, speaking to the audience of the power of the Spirit and referencing Romans 8:11. Jeremy Camp said,

The same power, the same Spirit, that rose Jesus from the grave lives within us and I believe that. And His word says that before Jesus left His disciples He told them, ‘I’m going to leave with you, my Spirit.’ The same Spirit that rose Him from the grave, allowed Him to walk on water, to heal many people…He said, ‘I’ve given you that Spirit.’ He said, ‘Greater things you will do than I ever did.’ Why? Because there are many of us with that Spirit. So I want to encourage you to go out in His power and in His Spirit to share the Gospel with this world.

After a short, worshipful concert, Franklin Graham took the stage. 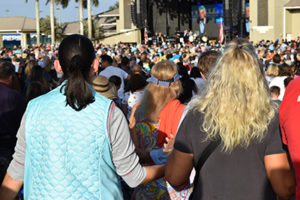 Graham stepped up to the podium and immediately expressed his gratitude for the freedom we have to be able to come together and worship publicly in this country, but added, “A day will come that preaching the Gospel will be called hate speech.”

Graham asked, “Have you noticed how divided our country is? Who would have ever thought we would ever be this divided. And I can tell you right now, I don’t have any hope for this nation outside of God.”

Graham encouraged the people to vote, saying that people are apathetic, thinking our vote doesn’t count.

Palm Beach County residents joined hands, bowed their heads and prayed as Graham asked God for mercy that we have drifted so far as we have from God. He prayed for our country, for President Donald Trump, for Melania, Barron and their family, for Vice President, Mike Pence and his family, and for all representatives of this country, including Nancy Pelosi, and Chuck Schumer.

Graham talked about the rebellion of Manasseh, King of Judah, and how he lead the whole nation of Israel into sin: into idolatry, witchcraft, sexual orgies, child sacrifice, filling Jerusalem from one end to the other with innocent blood, including his own two sons. Manasseh turned his back on God.  Graham asked, “Have you turned your back on God?” He told the audience, “God didn’t come to condemn you but to save you.” And he invited all those who wanted to make a decision for God, to stand up, confess their sinful ways, and dedicate their lives to Christ. And four hundred people made a decision to turn from sin and live for God.