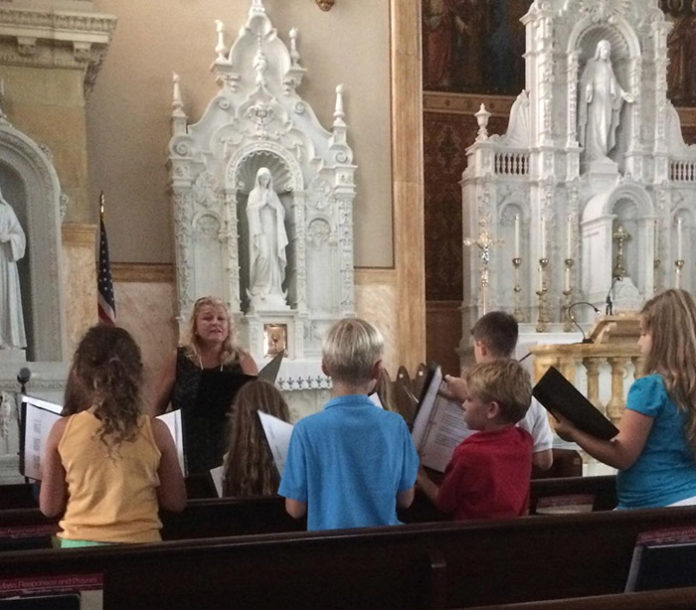 Maralyn Coscia began her music career in early childhood. As her mother tells it, Maralyn came out of the womb singing. Her mother loves to tell the story of their departure from Disney’s Magic Kingdom with a two and a half year old in the backseat singing the words to “It’s Small World” in perfect key. With a mom who was classically trained on the clarinet at the University of Pennsylvania and a dad who was a champ on the trumpet, music was a part of her world from day one. However her parents didn’t jump into music lessons.

Maralyn’s parents waited for her talent to develop and her interest to grow before committing to piano lessons in the fourth grade. It wasn’t until after her sixth grade performance in a school talent show, where she gained a reputation for singing, that her parents hired a voice coach. Only then did they seek out Dennis Walczak from the Metropolitan Opera, who would devote the next four summers in a row in New Jersey, developing her head voice and vibrato.

She laughs as she tells the story of returning home from college in 1991 and getting rejected over the phone by a church choir director telling her, “We don’t need any more sopranos.” The next week she showed up at St. Edward’s Catholic Church and asked if she could audition for their choir. Director, Richard Haney, immediately responded, “Audition?? You’re in!” The following three Sundays she found herself soloing on Ave Maria, Pie Jesu and Panis Angelicus.

As Maralyn began leading the mass as cantor, Reverend Frank Lechiara, or Father Frank as he was affectionately known, began sending checks to her, which she promptly returned. Finally after a few months of this, the church secretary called Maralyn to explain that this was called a “stipend” and Fr. Frank wanted her to keep it so that he could rely on her every week to cantor at all of the masses. Through four music directors, from 1991 to 1997, Maralyn continued to sing in the choir and cantor for the church on weekends, eventually being appointed the position of associate director under Sister Marie Therese.

While serving in the choir, Maralyn also served as music director and teacher at St. Ann’s Catholic Church in West Palm Beach from 1993 to 1997 and also at St. Francis of Assisi Catholic school in Riviera beach. It was through her experience with these schools that Maralyn discovered a love for sharing her gift of music with others through one on one voice coaching. Beaming with pride and pulling up pictures and videos from her phone, Maralyn describes the progress and performances of her students as if they were her own accomplishments.

In 1997, when the Director of Music, Sister Marie Therese, was called back to the mother house in St. Augustine, Fr. Frank promptly offered Maralyn the position. With tears streaming down her face at the mention of the late Fr. Frank, Maralyn recalls serving under this tough boss but tender father figure to whom she often turned for advice. With nostalgia in the air, she described how meaningful her experience with God has been as year after year she breathed in the music of the choir streaming down from the loft with their five part harmonies echoing through walls of this beautiful ancient church.

Maralyn retired from St. Edward’s in 2018 and is now living in Hayesville, NC, where she occasionally cantors for area churches.

Maralyn is an amazing musician!!!

UK Churches Exempted from the ‘Rule of Six’

Nearly 1,000 People Of All Faiths Volunteer, Gather In Solidarity Against...

The Hand of the Lord Protected Rebecca from a Murderer in...

February 5, 2019
You are going to send email to
Move Comment