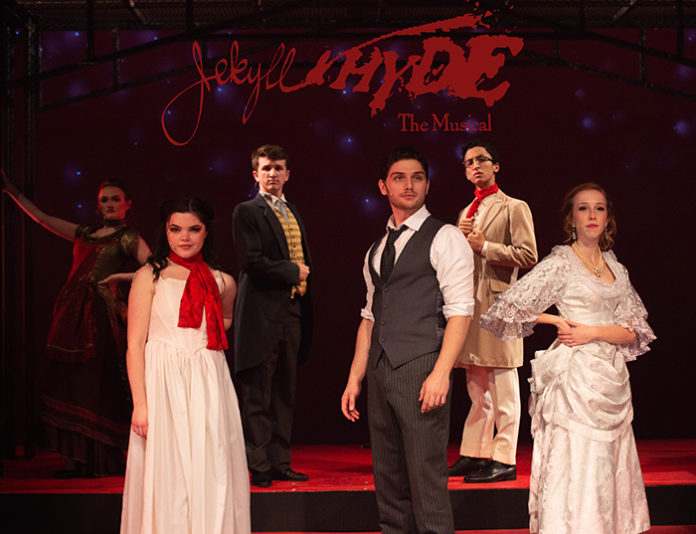 The King’s Academy finished out their last week of the production of Jekyll and Hyde, a musical which they also produced in 2015, winning the 2016 American High School Theatre Festival award for outstanding musical theater along with an invitation to produce “Les Miserables” in London’s West End and Scotland during the 2017 Fringe Festival.

Last Saturday’s performance drew the family of the musical’s author, Frank Wildhorn, to the audience.

In celebration of the Fiftieth Anniversary Celebration of The King’s Academy this year, Artistic Director, Mr. David Snyder, invited alumni, Gregorio Umana, the original lead in TKA’s 2015 production and now a senior at the New School in New York City, to again play the role of Dr. Jekyll and Mr. Hyde. Since his experience as a student at King’s, Gregario demonstrated a fierce loyalty to the people in his life, so it was not surprising that he accepted the invitation to return to his TKA family.

When asked if it was difficult to take time off in his last semester of college to return to TKA, Umana said, “My teachers all loved the idea. One of my teachers was going to come, but it didn’t work out. Thank God the school supported me.”

Asked of his plans for the future, Umana said, “I love opera, but that is not what I am focusing on. I want to create my own music and my own identity.”

Among the audience was Gregorio’s mother and father and his sisters, who came from Columbia to see Gregorio’s performance. His mother, Patricia Montana, a warm, humble, quiet woman of few words, said, “He has liked music since he was born.”

Gregorio started his musical studies with the violin, when he was six years old. His mother never had to ask Umana to practice, “Practicing was his responsibility,” Mrs. Montana said, “and he did it on his own. He is very disciplined and committed to work. He is the one who did everything. I just backed off. He was the one who decided, when he was eleven years old, to go into a musical theater academy.”

Gregorio will be returning to play the role of Phantom in TKA’s production of Phantom of the Opera in April, 2020.

Interview with Gregorio Umana from 2015 production of Jekyll and Hyde

TKA senior, Albert Elias, also played the role of Dr. Jekyll and Mr. Hyde in this year’s production, along with Alli Graves who played Emma Carew and Olivia Henley who starred as Lucy Harris.

Soprano, Alli Graves, stunned the audience with her solo, “Once Upon a Dream” as well as her duets with Gregorio and Olivia Henley. Olivia brought thunderous applause with her stunning solos, “No One Knows Who I am”, “Someone Like You” and “A New Life”.

Olivia Henley is a junior at The King’s Academy, and also played Molly in Ghost the Musical in her freshman year and in her sophomore year, she played Alice Bean in Titanic, and Ellen Scott in Miss Saigon.

Olivia was in 7th grade at The King’s Academy when she saw their 2015 production of Jekyll and Hyde and said, “It was really cool to be able to play opposite of Gregorio four years later. He is excellent in everything he does. Seeing the way he carries himself and the choices that he makes that are very confident and strong; it made me more confident as a performer myself.”

Nearly 1,000 People Of All Faiths Volunteer, Gather In Solidarity Against...

February 4, 2020
You are going to send email to
Move Comment