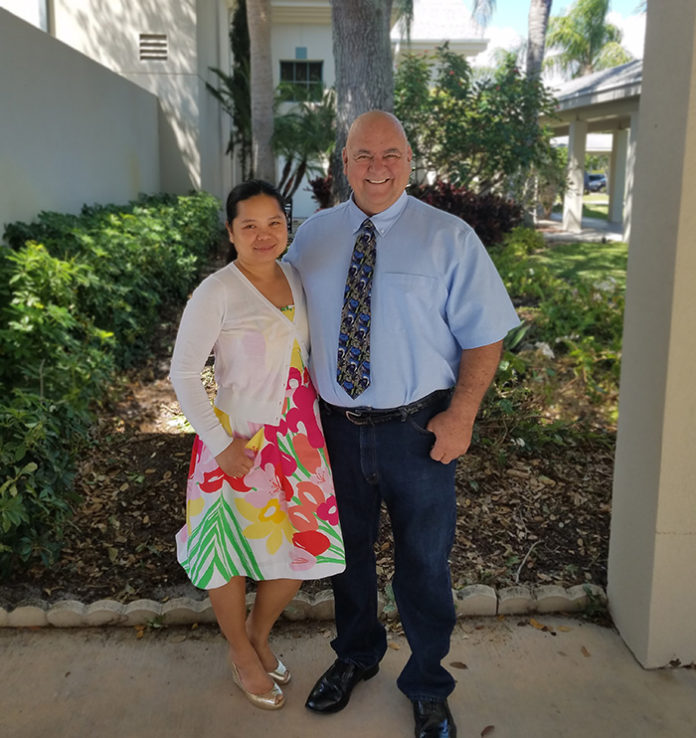 From biker gang to miraculous healing, Palm Beach County resident, John Whalen is a walking testimony of the healing and restoration that comes from a life lived with God.

In November of last year, John had met his insurance deductibles, so he decided to go for the recommended colonoscopy. The results were not good, and within two weeks John was in the Palm Beach Gardens hospital having surgery to remove a 17 millimeter polyp from his stomach.

After surgery, the doctor had more bad news. “You know, John, you’re a big tough man on the outside, but I gotta tell you, you’re even tougher on the inside. The knife wouldn’t cut it. I couldn’t get it out. I hacked a couple of pieces off of it, and I burned it. I stopped the bleeding by putting staples in it, but I can’t get it out, and I’m going to have to send you to a specialist.”

John said, “So now, I’m really concerned. So she sends me to this nice old Jewish guy, Steven Steinberg, in Boca Raton at the Boca Raton Lynn University Cancer Center.”

John gathered the photographic images of the polyps and the staples that were now also visible, drove to Boca, and was informed that he was scheduled for another surgery the following week.

In the meantime, John attended the quarterly healing service held in the small chapel on the campus of First Presbyterian Church in North Palm Beach.

The service is casual. They have communion. Sometimes they have music. Usually they don’t. They offer group prayer and then the church Elders all lay hands on those who wish to come forward for prayer.

There was no singing this time. Also present was Frances, a fellow Deacon whom John had been serving alongside for years. She was also praying for healing.

Frances went forward, and John broke protocol to pray for her. He said, “I had to for poor Frances because I couldn’t stand it. There was no way I wasn’t going to lay my hands on her. I know I’m not an Elder, but I was that day.”

I said, “Who’s that?” And they said, “That’s your doctor.” And I said, “No. That is not my specialist. That’s not the guy that I saw. That’s not my doctor.” Now this thing is strapped on my nose already and I’m like, ‘Oh my gosh. I’m going to die today,’ because this was not the guy who was supposed to do this surgery. And I didn’t have time to say anything or to think about how I could rebuke this. And I hear him say, ‘You’re going to be dizzy now. And then I woke up and the doctor is saying, ‘You’re a lucky man. I went down there. I can see where they burned your stomach, but there’s nothing there.'”

John had in his possession a picture of the polyp. “It was a photographic picture from an endoscope. It was a camera shot. I saw it with staples in it less than a week before. And there was nothing there now.”

The first question John had was, “Can I eat tonight?” He hadn’t eaten for two days didn’t expect to be able to eat for another two days.

The doctor continued, “I don’t know what happened to it, but it’s not there. I took some samples of the tissue in the area where I saw the burn, and we’re going to check them out, but there’s nothing for me to remove. You can eat tonight. We didn’t do anything invasive.”

“It was awesome,” John said. “They didn’t open me up. My doctor bills are incredible now, but that’s the way it goes, and I’m just happy to be healed.”

In addition to the polyp’s mysterious disappearance was the mysterious disappearance of his symptoms. “I’ve got to tell you, my symptoms of this were nasty, uncontrollable diarrhea. I’d be in the car, and I’d be like, “Oh my gosh. I’m in trouble.” In his role as a Deacon and watchman, patrolling the church campus, John had to excuse himself on more than one occasion due to his illness. “I haven’t had diarrhea one time since this [healing] happened. It’s finished.”

The polyp’s disappearance isn’t the only miracle that has happened in John’s life. Not much more than a decade ago, John led a very different life.

“I came from a dysfunctional family,” John said.

When he was a baby, John was placed in an orphanage.  Seven years later, his mother returned with her new husband to adopt John, but life didn’t get any easier.

“She came back with this military major who was abusive. He beat the crap out of us with wet towels and sticks and fists. He jumped on my sister too. It was horrible. By the time I was fourteen years old, I had put him in the hospital.”

That was when he went to live with his aunt.

“So Aunt Florence died and I got $20,000 and she gave a couple hundred thousand dollars to the church. And she gave money to everyone.”

Aunt Florence may not have given John her entire inheritance, but before her death, she did do one thing for him. She prayed for him. And she took him to church.

“She took me to Catholic church, but they spoke in Latin, you know…dominoes and biscuits…and all you Ginnies get off the grass…”

The seed of John’s faith had been planted, but it would be many years before it would sprout.

After 22 years of marriage to an addict, John finally divorced.  He raised his children alone for the last few years. “My daughter went off to college, and then she moved to England. She’s very successful, and I’m very proud of her.” But after that, John bought a motorcycle, and things started going downhill fast.

John started to hang around with the Outlaws, the notorious bikers’ gang whose former president was listed on the FBI’s Ten Most Wanted Fugitives until his murder conviction in 2001.  John’s association with the Outlaws was growing, and his place among them was becoming established as he won two of their horseshoe contests and spent most of his evenings with them.

Then one day John encountered a very different bikers’ gang.

“Then all of the sudden I ran into the Christian Motorcycle Association, and I ran into the Soldiers for Jesus. Those are two motorcycle gangs. And they sucked me away.”

In 2000, at Maranatha Church in Palm Beach Gardens, John dedicated his life to the Lord.  Shortly after that, he met his wife, Jean, and they have been married for ten years now. “That’s the best thing I ever did in my life.”

John and his wife continue to serve at First Presbyterian Church in North Palm Beach. There is no pretense in John’s declaration of faith. He humbly does whatever the church asks of him. His faith is deep, and his walk is straight, and the Lord’s healing is overwhelmingly evident in his life.

There’s an Angel Building an Ark on Dixie Highway in West...