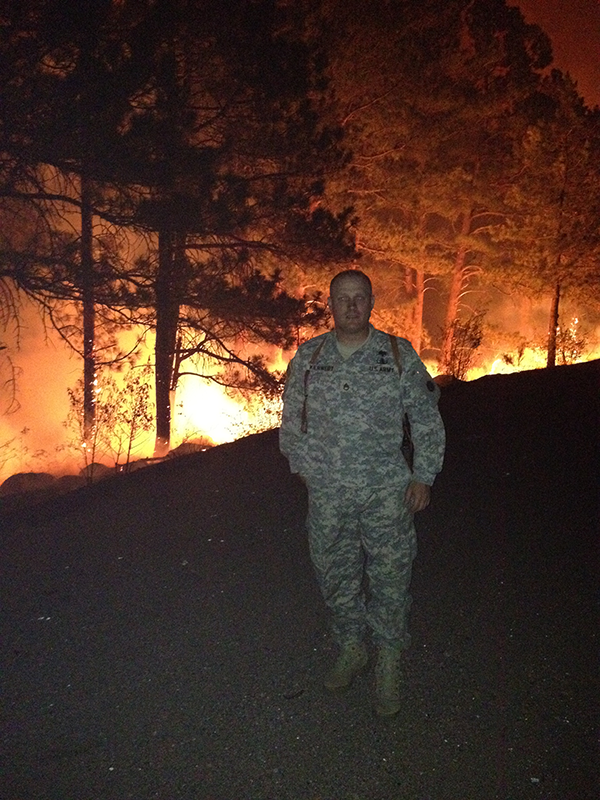 On June 9th, 2012, just outside of Ft Collins, Colorado Lightning struck a single tree on private land around 6:00 in the morning.

grudgingly, I prayed for this lady’s property. And as I did the lady looked up at me and said, “Mister, if my property is spared I will go to church every day for the rest of my life.”

This fire quickly burned through approximately 136 square miles or more than 87,000 acres.

This blaze took over 2000 fire fighters to fight and more than 3800 personnel to support the firefighting efforts at a cost of over $38.4 million.

Over 250 homes and up to 500 structures were destroyed, and one person lost their life. This was a devastatingly deadly natural disaster to the area and its community.

Because of my service to the state of Colorado, as a state Trooper and as a member of the Colorado Army National Guard I was activated to be the NCOIC of operations. This meant that I was in command of an entire Military Police Battalion responsible for keeping residents of this community safe, along with their property.

These MP’s would provide check point security and assist with evacuation from the hardest hit areas. They also secured residents’ property and kept looters from advancing beyond the safe fire perimeters.

The only way to explain this woman is with the word Ugly. Her personality was ugly. She was very vulgar; very upset about the situation, and she was assaulting my soldiers with her own feces and spit.

As I fought against this thought, and after getting spit on many times by this lady, I made the decision to have her arrested. And just before putting her in the patrol car for assault on my soldiers, I asked her if she would be open to me praying with her.

This did not help de-escalate the situation. It agitated this lady even more, but a man that was with her was able to calm her down by saying, “He doesn’t have to pray for you. Let him pray for your property and maybe that will help in some way.”

I was shocked when she turned to me and said, “Yes, you can pray for my property.”

So grudgingly, I prayed for this lady’s property. And as I did the lady looked up at me and said, “Mister, if my property is spared I will go to church every day for the rest of my life.”

She smiled and then spit right in my face. Well, she spent the next few nights in the county jail. After 21 days, the High Park fire was 100% controlled and contained. Over the next few weeks we slowly allowed members and residents of this community to return to their homes.

I knew that this lady would be difficult because, of the 37 homes in her neighborhood only one survived. So, I staged myself and some law enforcement in her area so that she would not be able to attack or assault any of my soldiers.

And lo and behold, not only do I see this lady but I hear her calling for me.

And as she approached, she fell to the ground sobbing and hugging my feet, asking for directions to the nearest church. Her home was the only one spared.

After giving her directions to a church in the local area, another resident was calling my name and stating that he had a bone to pick with me. This elderly man explained that he has been a follower of God his entire life and that a week before the fire, he had a massive stroke and has spent the last five or six weeks in the hospital.

When He was finally released that morning, he had cursed God because he heard that everything he had was destroyed.

But the worst of it was that the most disgusting and ugly person he had ever met, one of his neighbors’ property was spared, and he was mad at God. Can you see why he was angered with God? He dedicated his life to being a good Christian, and this ugly person’s property was spared. After being released from the hospital, he comes home to his property and runs into the lady he didn’t want to see. He was angered and ready to strike at her.

But guess what happened. She fell to his feet crying tears over them and hugged and kissed his feet, asking for 20 years of forgiveness.

Therefore, if anyone is in Christ, the new creation has come: The old has gone, the new is here!

Second Corinthians tells us, “Therefore, if anyone is in Christ, the new creation has come: The old has gone, the new is here!”

And as this story shows, there is truly Grace in creation. Our lives are forever changed through these disasters as well.

My mother-in-law gave me some good advice. She reminded me that these storms are meant to remind us of what is important in our lives.

It is God who can turn a…

Science validates Scripture being very good by the new growth that happens during these natural disasters. Showing that God had a plan and a hand in his ever-continuing plan of creation.

All things were made through him, and without him was not anything made that was made. (NIV) (John 1:3)

Wait God made everything? And it is very good? God made natural disasters? So how could they be good? After all, they destroy so much of what we hold closest to our hearts.

To make a critical determination of what God is doing in these events we must also get an understanding of what and how these events impact the earth.

We see the impact that these natural disasters have on our lives and to our property.

But what do these events do to the earth as they build in strength and move through the different areas of the world?

How are these events very good?

These natural disasters are very good because God uses them to bring new birth–new life to the areas they impact.

If we look at the fires burning in the northwestern regions of our country, we see states like Montana, Idaho, Oregon and Washington burning uncontrollably, devastating homes, property and the ability to produce from the land.

These natural disasters are devastating to those whose lives are in the center of the affected areas. In these times, it’s very difficult to focus on anything but ourselves and it’s very hard to see good in these events, let alone to see very good.

But in the aftermath we find new life as well.

We find that these fires bring new life to the trees, the grasses, and the plant life in ways that effect the entire ecosystem of the area. Strong trees survive, releasing seeds to fill in the areas where dying trees once stood.

Unbelievably, there are even pine cones out west that cannot drop their seeds for new growth unless fire devastates the area.

Colorado is infested with the pine beetle which is killing thousands and thousands of Colorado’s pine trees. Scientist have not been able to stop these beetles from devastating the Colorado pine forest ecosystem.

The hurricane and the flooding clear out old growth and dying tree limbs. The battered shore lines redefine our beaches and reefs. The storm surge and flooding distributes seeds for new growth allowing healthy trees to flourish, which in turn protects the new growth from wind, sun and heat that can stunt growth in the most important times of a trees life cycle.

This is a part of creation that we often miss. We miss it because the initial impact and devastation is the first thing we see.

If we understand God’s love and grace in creation from His Scripture, and we see just how amazing these events can be in how God replenishes the world through these events.

These natural disasters are big deals. They affect many peoples’ lives. As stated earlier these events are a mess. Often a test of our faith, these events can be a very difficult trial for many. And they always seem to make us into a victim.

This is the hardest part of understanding God’s creation; attempting to understand how it affects the individual soul. You see, because God is actively involved in your creation story. Recap of the 31st Annual Respect Life Conference in Florida

October 23, 2017
You are going to send email to
Move Comment