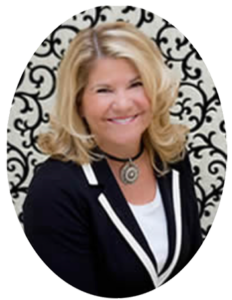 A student of the Word for over 55 years, she is a frequent guest on Moody Radio and President of Power to Grow Ministries. Jackie has authored numerous popular books, including Lady in Waiting, The Mentoring Man, A Man Worth Waiting For, Free Yourself to Love and many others. She and her husband, Ken, of 43 years have been long time residents of Palm Beach County, where they raised their two children.

As women poured into the welcome center of TFBC, individually packaged trays of charcuterie board delicacies were stacked up high, wrapped in a bow of pink tulle with beverages of all kinds just across the table. A smorgasbord of desserts would be presented later.

Natalie Richardson, wife of Tequesta’s First Baptist’s senior pastor, Mike Richardson, opened with a few intriguing questions for everyone. Then a short time of worship followed, before Jackie Kendall was welcomed to the podium.

Women are control freaks…if you are a woman and you have a pulse, you are controlling.

Jackie’s topic for the evening was Every Woman’s Battle with Control. She began with the unpopular proclamation: Women are control freaks. She said, “Tonight, I’m not talking about your mother, your mother-in-law or the person sitting next to you. I’m talking to you, because if you are a woman, and you have a pulse, you are controlling.”

She pointed out that we are a generation of people who are seeking power and control. But the best place to be, she says, is in a position of the power of Abba God. (Gal. 4:6)

She believes that Genesis 3 is speaking of anxiety, translating Genesis 3:16 literally, increasingly I will increase. She said, “Eve thought independence was better than dependence. In that moment, part of the curse was anxiety. Some of you think, ‘No Jesus died on the cross for the curse.’ No, Jesus died on the cross to save your soul. Your baseline will be anxiety until you die. In verse 17, men get the same curse, but they don’t show it. So they drop dead of heart attacks. We show it. We talk to girlfriends, we express it. We bear one another’s burdens. This is a burden, and we will carry it until we meet Jesus.”

Anxiety comes from fear. Jackie said that everyone thinks anxiety is a personality. “No, It bleeds from fear.”

The remainder of Jackie’s talk focused on four things we fear.

“I’ve had more people come to me and say ‘What if this happens? What if I get bad results on this test? What if my husband doesn’t get that job? What if my kids…? They all start with what if…?”

Her answer to the anxiety is God’s grace. His all sufficient grace. His glory and power are made perfect in the imperfect. In weakness. She spoke of a “fun” translation that says, Therefore, I have cheerfully made up my mind to be proud of my weaknesses, because they mean a deeper experience of the power of Christ. (2 Cor. 12:7 PHILLIPS)

She said that everyone wants to be strong, so we can live independently, but your weakest moments are the best moments. That’s when His strength is made perfect. “That’s when God doesn’t have competition with the marquee. His glory. Not my glory. His honor. Not my honor.”

2. Fear of being vulnerable

The second thing women fear most is vulnerability: people finding out that they’re not perfect. Intimacy. She emphasized the syllables: Into-me-see.

“Nobody’s perfect,” she said, “That’s why Jesus died.” She spoke of what she calls Polished Pretenders, people who always look like everything is fine. “You’re going to fine yourself to death. ‘How are you?’ ‘Fine.’ Liar. I know that you’re having trouble with your husband because he told me.”

She doesn’t advocate telling everyone what you’re struggling with. But she does advocate having a few select sisters in Christ to bear your burdens (Gal. 6:2).

She said, “It’s interesting that we’re all worried. Remember, God wants truth in the innermost parts. If you’re acting one way, and it’s not the truth, you stop that now. When people ask how you are, say, ‘It’s not been a great week, but please pray for me. I hope next week’s better.’ “

Jackie learned from having worked with professional athletes for the past 22 years, that people are paralyzed by the fear of disappointing the people they look up to.

She told the story of a family event to which she declined attendance. She was standing in solidarity with her immediate family. People asked her how they were supposed to explain her absence. She said, “Just say I’m not there.” She said that we don’t have to explain everything. Just say no. It’s a complete sentence. Let grace handle the rest of it.

Jackie spoke of another event at which she was discussing boundaries. Some of her examples were based on the research and material of Dr. John Townsend, author of Boundaries. Little did she know, he was sitting in the audience, in the seat next to her!

“I taught Ten Things I Can’t Say No To, and I went through this whole list and sat down, and they were like, ‘We want you to meet Dr. Townsend.’ “

Dr. Townsend told Jackie, “I’d like to tell you something you can take with you. Just be careful for all those people who can’t say no. They don’t realize that some people only love them because they say yes. And when they start saying no, either their real love comes forth, or the lack of it is revealed.”

Jackie suggested to try it on someone who you never say no to. “Try it and watch how they respond. A true friend loves you for your no as well as your yes. And when people say no to you, treat them with the dignity of their right to say no.”

People are always teaching about success. But what is a sure formula for failure? Trying to please everybody. Try to please everyone and you will fail. I promise you.”

4. Fear of Making a Wrong Choice

Jackie talked about making life decisions. Questions about returning to school, changing jobs, or moving can be so difficult to make, it can be paralyzing. But when you are paralyzed by indecision, ready or not, life will make the decision for you. So make a choice and go with it.

Choices are part of growth and the process of maturity, and no choice in your walk with Jesus is ever a fatal error.

If you choose the road you should not have trod, don’t let it get you down. Get back to where you were when you started and keep going.

She said, “You have anxiety about all of your choices like something could be wrong. Choices are part of growth and the process of maturity, and no choice in your walk with Jesus is ever a fatal error.

Control comes in many forms. “We have our specialties. They’re listed in the book of People’s Specialties. Attempt to control. I am a full time job. a hot mess. I have enough to worry about worrying about myself.”

Jackie talked about he choice of obedience. She told stories about decisions she made to follow the nudges God was giving her, even when she wasn’t sure or didn’t want to do it.

“Don’t fear that [nudge]. Be obedient. Every great miracle that I’ve ever experienced in my whole life was preceded by a holy nudge. Don’t cheat yourself out of all that God has for you.”